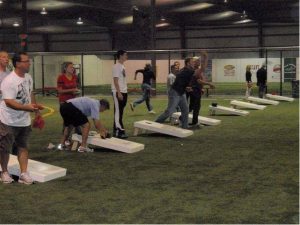 TEAM B2B is a Naperville Area Chamber of Commerce leads group that focuses on business-to-business relationships. This was their third year hosting the Bags Tournament, but this year for the first time, they had their very own website, which was created by Design & Promote.

“Since I was a sponsor at last year’s event I realized the challenges TEAM B2B was having for their registrants. I wanted to make the process smoother by building a website which linked to online registration for both sponsors and players. This was able to give them the ability to not only register for the event but they were also able to upload company logos, send email invitations and more,” said Bruce Jones, owner of Design & Promote.

The tournament was held in Naperville on Saturday, October 22nd and KidsMatter’s Executive Director Idalynn Wenhold was present for the event.

“KidsMatter is so grateful to Design & Promote for the amazing website and registration process they created for the Team B2B Bags Tournament. The turnout was twice the size of last year and I believe a lot of that should be credited to the tournament’s website,’ said Idalynn.

Chicago-area SEO company, Design & Promote is no stranger to assisting the not-for-profit world. Last year the company offered Naperville website design at a nearly fifty-percent discount to all nonprofit organizations.

“After years of working in the Internet field I know how important it is for a company or organization to have a well presented and functional website. It is a great method to get your message out there and increase exposure. Creating a website for a fundraising event does just the same, and increased exposure will inevitably lead to a more successful turnout,” Jones said.

The 3rd Annual Bags Tournament had a total of 65 bags team compete, 17 teams in the competitive bracket and 48 in the social. Some of the big winners include: