The Latest In Chicago Web Design: The Comedy Shrine 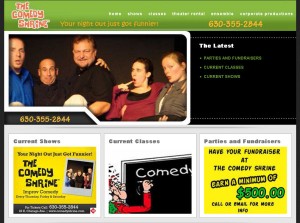 The Downtown Naperville comedy club partnered with Design & Promote to develop their new website and spread the fun online. The Comedy Shrine needed a place where people could get a feel for their comedy club on the Web, and find out more information about them. Their new site includes pages to learn more about their variety of shows, different comedy classes, ensemble, and even rent the club out.

A unique function that Design & Promote included on this website is the ability for visitors to follow the Comedy Shrine easily by using icons for sites like Twitter, Facebook, StumbleUpon, Digg and Google Bookmarks, that link to those respective sites. The Chicago SEO company also included a section on the homepage for The Comedy Shrine’s most recent specials, which The Comedy Shrine can update whenever they need to.

CEO of Design & Promote, Bruce Jones, says, “This site was one of the most fun to design. The Comedy Shrine wanted some great features for their website, and they were a pleasure to work with.”

Other features that were included in this web design include a video of the week, online booking with the theater rental request form, and an attractive layout that is easy to navigate.

About The Comedy Shrine

The Comedy Shrine main stage show features top professional actors performing short form improv similar to those seen on ABCs “Whose Line is it Anyway?”. The audience interaction means each show is uniquely funny! Other shows include The Comedy Shrine “Better Than Cats!” musical with dinner and theater package. Visit their website to learn more about The Comedy Shrine and buy tickets online.